Learn more about how The Mill and OptiTrack customer Nvizage provided VFX and previs for Snow White at CGSociety.

Who is the fairest of them all? OptiTrack’s Insight VCS, according to preeminent previs house Nvizage. Used on Universal’s “Snow White and the Huntsman” to bring in six major sequences and over 320 shots, OptiTrack’s virtual camera system became the crew’s window into a world that blurred the line between real and make-believe. 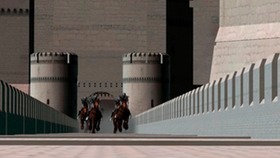 “Whatever film we work on, our objective is the same,” said Nvizage co-founder and previs supervisor Martin Chamney. “We want the audiences to feel like they are in the middle of the action. The Insight VCS helps us find a realistic perspective in real-time, so our scenes can quickly jump from interesting to immersive.” 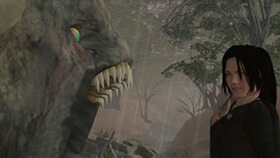 By using motion capture to track the camera’s physical position, Nvizage and key crew members like DP Greig Fraser could visualize how live action and CG elements interacted with each other in real time. This allowed the team to flesh out shot and lens ideas before principal production set anything in stone. As the scope of the shot assignments changed from extreme wide shots of battlefields to close-ups of pivotal character transformations, the Insight VCS’ ability to validate production strategies became increasingly more valuable. For instance, when trying to evoke the cavernous look established by the concept art for Ravenna’s Throne Room, Fraser used the VCS’ real-time display of the CG environment to assess how different lenses would paint the room. He found his match in a wide angle. 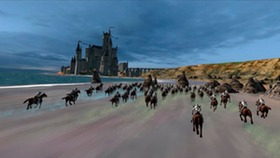 When a scene called for more dynamic camera moves, the VCS’ versatility leapt to center stage. Since the system’s motion capture data can be mapped to any type of CG camera in Autodesk MotionBuilder, achieving the look of a handheld, car or heli-mounted unit was easily attainable. Nvizage used this freedom to previs a variety of small and large scale shots. The VCS’ software plugin and mappable controllers also allowed them to easily adjust camera speed while they were in their virtual environment, as well as automatically smooth out any accidental bumps and jolts that came with the rough terrain. Streamed shots were ported into MotionBuilder, facilitating instant takes that could be screened or carried on into Autodesk Maya for further animation and rendering. 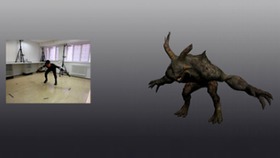 During the film’s Troll Bridge sequence, Nvizage added OptiTrack’s body mocap system to the mix to record performance footage of VFX Supervisor Cedric Nicolas. Incorporated into the sequence as a supplement to the production’s pre-existing animation, his troll-like gestures provided the realistic movement the scene had been lacking. Other collateral gained from the shoot like step diagrams, hand impact points, and spatial measurements that revealed the distance between camera and actor could be used by the SFX team as detailed reference pieces for their design work.

“The OptiTrack suite is a big part of what makes the Nvizage arsenal of previsualization tools so effective,” added Chamney. “Big productions have always required big results from companies in our position, and with the Insight VCS we feel we can add that extra something that continues to bring clients through our doors.”

OptiTrack About Who's Using OptiTrack?Nvizage